The struggle of SIKKAD K3 continues

by Casey Cruz and Shirley Songalia

Last 10th of December 2021, we unexpectedly saw the mothers of pabahay once again. One of them was Anafe Cainglet, president of San Isidro, Kasiglahan Kapatiran at Damayan para sa Kabuhayan, Katarungan, at Kapayapaan (SIKKAD K3), or better known as Ate Tata. They traveled all the way from Rodriguez to Manila to participate in that day’s protest action. That was the last major action for 2021 and we commemorated the 73rd anniversary of International Human Rights Day (IHRD) with protests and demands to hold fascist Duterte accountable to crimes against humanity in the Philippines.

Protests like those on that day seemed to be a reunion to fellow activists in the country because of the endless militaristic lockdowns and sloppy response of the Duterte government to Covid-19 pandemic. We were in pabahay at the height of a week-long relief effort conducted by the Southern Tagalog Serve the People Corps in Kasiglahan Village in the last quarter of 2020 after flash floods brought on by Typhoon Ulysses damaged their houses.

Kasiglahan Village is located in Brgy. San Jose, Rodriguez, Rizal. It is one of the urban poor communities constantly being devastated by floods and typhoons such as Typhoon Ondoy, Rolly and Habagat. Whenever there is a typhoon, the residents in pabahay are nervous because of the flash floods, landslides, breakage of substandard dikes and the inevitable destruction of their belongings. The current pandemic situation is  It is also undeniable that the current situation of the Covid-19 pandemic has caused more difficulty surviving the typhoon’s aftermath.

After every heavy flooding, mud is left in and out of their homes while they check on their things that can be saved, cleaned and reused to get started. We could still remember how the women of pabahay have rallied with their calls for “Ayuda at Hustisya!” in 2020 because of delayed calamity assistance, and 2 of the community members died due to flash floods.

One of the members of  SIKKAD K3 holding a placard during the Kalampagan for Ayuda at Hustisya after the rampage of Typhoon Ulysses, November  30, 2020.

Kasiglahan Village was supposed to be decent housing for the urban poor families from Manila who have been demolished from their houses in lands categorized by the government as “danger zones”. But, the public housing project built by New San Jose Builders in 2000 under the Joseph Estrada administration was later declared as “danger zone” too. Hence, it is not suitable for a socialized housing project due to its vulnerability to flooding and earthquakes as it is close to the West Valley Fault Line.

After several years from its construction, most of the housing units in pabahay were empty and covered with tall coarse grass until 2016. Just like other public housing projects in the Philippines, the materials used to build the housing units in Kasiglahan Village were cheap and substandard.

It was in 2016 when more than 1,500 relocatees from Metro Manila, including Ate Tata occupied the vacant housing units. Despite being far from their previous sources of income, these relocatees were left with no choice as shelter to live on is every family’s primary necessity.

Public housing in the midst of nowhere?

Ate Tata was one of the residents who were forcibly demolished after the Aquino administration approved at least 50 neoliberal projects under the Public-Private Partnership in Metro Manila. The government has not given priority to relocation and decent housing built in the city where there are adequate employment opportunities. Instead, public housing projects under the supervision of National Housing Authority (NHA) where built in remote areas.

Past administrations did not consider laying out concrete solutions for urban poor communities and did not ensure that basic social services would be accessible to them. Along this negligence is government’s consent for extensive operation of quarrying and crushing sites owned by foreign monopoly capitalists in the towns of San Mateo and Rodriguez.

By the year 2020, at least 15 giant quarrying companies have acquired permits from the Department of Environment and Natural Resources (DENR) and local government units. One of these is the Monte Rock Corporation owned by Angelito F. Ignacio. The quarry operations of Monte Rock Corporation in mountain ranges of Rizal results to rapid flow of flood water to residential areas of San Mateo, Rodriguez and Marikina City. Therefore, these quarrying companies are also conscientiously permitted at the expense of plundering our environment.

It is only every after severe flooding that the DENR is prompted of its obligation to investigate these quarrying companies in Rizal and to impose suspension of its permits due to environmental setbacks. However, these suspensions are temporary only and were revoked in a matter of just a couple of months. These quarrying firms can resume operations without being held accountable for worsening the condition of flood-affected communities like Kasiglahan Village.

Apart from the issue of the quarry operations, there is also the Wawa Bulk Water Supply Project that will rebuild the Wawa Dam in Rodriguez. It was formerly called Montalban Dam and first operated in 1909 and was abandoned in 1968 after the construction of Angat Dam. The plan to reuse the Wawa Dam has been stalled for almost 30 years and was recently enacted under the Build Build Build program.

It was only in 2019 that the said public-private partnership project was approved. The main proponents, Prime Metroline Infrastructure Holdings of Enrique Razon and San Lorenzo Ruiz Builders and Developers Corp. of Oscar Violago, signed an agreement with Manila Water Co. which will serve as official water distributor in Manila. Razon and Violago are both known as local corporate elites in the country. This PPP will also be funded by the government’s loan from BDO Unibank Inc.

The Wawa Dam is considered by Metropolitan Waterworks and Sewerage System (MWSS) as the immediate and alternative solution to water woes in Metro Manila. Its fast-tracked approval and reconstruction branched out from the controversial and opposed China-funded mega-dam project, the Kaliwa Dam in Quezon province.

Violago-Razon’s ₱ 24.5-billion dam project will evict and destroy the livelihoods of farmers and indigenous people in Rodriquez, San Mateo and Antipolo City. The Wawa Dam restoration caused heightened military and police presence at construction sites directly affecting the lives of residents of Kasiglahan and neighboring barangays in Rodriguez.

Clearly, the pabahay seems to be in the midst of nowhere. The failed project of the Estrada administration is furtherly exacerbated by the anti-poor policies and neoliberal projects of the Duterte administration.

Once, we had a conversation with the members of SIKKAD about what they knew of the plan for pabahay if it had not been inhabited and occupied by them. All they knew is that the 600-hectare housing project will be converted to a public cemetery. We could still recall Ate Tata said, “Kaming mga buhay ay nangangailangan, pero bakit sa mga patay ito ilalaan?”

For the members of SIKKAD K3, their demands are simple. They just want access to clean water, affordable electricity lines, livelihood and personal security. All of these are basic human rights that should be enjoyed by everyone. But for Ate Tata and other residents of Kasiglahan Village, these rights should be fought for.

SIKKAD K3 actively participated in actions and programs to assert their right to basic social services including the supposed assistance for urban poor relocates they never received. These unified calls by the marginalized sectors has long been ignored even by past administrations. But, Duterte administration has withhold democratic spaces for the marginalized. Instead of listening to their pleas, they are being treated as rebels or members of the CPP-NPA.

Forms of dissent and the right to self-organize was categorized as crime and insurgency against the tyrannical administration. Civic organizations in the Philippines carrying  progressive and people-centric demands like SIKKAD K3 where being tagged as enemy of the state – the democratic conditions worsened under Duterte’s Executive Order No. 70 which institutionalized the National Task Force to End Local Communist Armed Conflict (NTF-ELCAC) and whole-of-nation approach and the passage of the draconian Anti-Terror Law.

A misang bayan was held in Kasiglahan Village amid threats brought by militarization, June 30, 2020.

Residents of Kasiglahan Village are no longer just afraid of storms or earthquakes. They are now facing threats of being closely monitored inside the community and being guarded by elements of the state. Instead of doing consultative efforts on the needs of the poor residents of pabahay, government and its institutions are busy of its communist witch-hunt. Members of SIKKAD K3 including Ate Tata, have been summoned several times by NTF-ELCAC and the 80th Infantry Battalion of the Philippine Army to participate in their local peace engagements.

In assemblies being hosted by the NTF-ELCAC, the invited members of SIKKAD K3 are being forced to surrender as members of New People’s Army. They are also being threatened that if they will not surrender as rebels or will not provide information about this armed groups, and threatened that if they did not confess as members of the armed group, they would not be provided with clean water, electricity lines and housing rights will not be awarded to them.

If the Duterte government truly cares for the poor, it must promptly listen to their demands and provide pro-people plans and legislation. This is no different from the experience of the urban poor community in Pandi, Bulacan – daily accounts of harassment, intimidation and red tagging and vilification to demoralize their will to fight for their rights.

Duterte’s malicious task force has led to its brutal peak. On March 7, 2021, the Bloody Sunday Killings resulted in the death of 9 innocent CALABARZON activists. Combined forces of AFP-PNP-CIDG killed the two members of SIKKAD K3 who were Melvin “Greg” Dasigao, and Mark Lee “Happy” Bacasno. Operating units said that Dasigao and Bacasno were armed and resisted arrest. 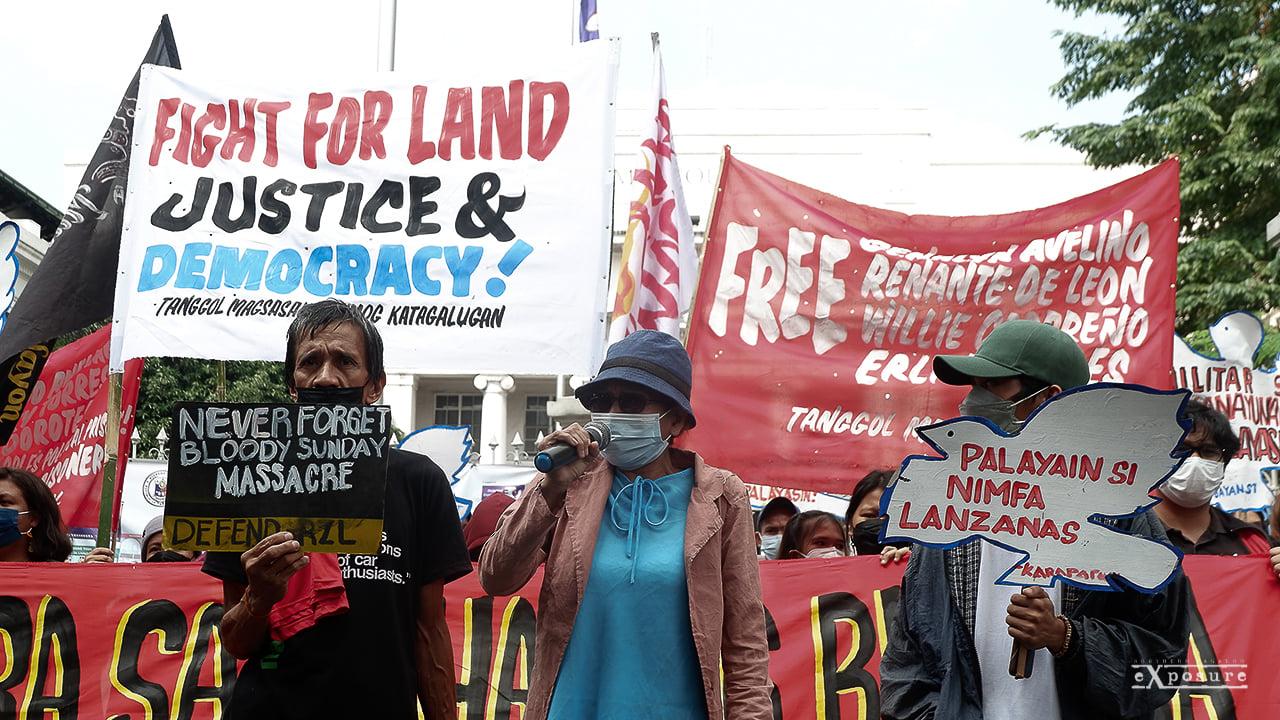 Rose Salundaga, wife of Melvin Dasigao, calls for justice for the victims of Bloody Sunday Massacre in front of the Supreme Court of the Philippines, December 9, 2021.

Perhaps this is the cemetery they refer to. The NTF-ELCAC is desperate to silence and bury the united resistance of SIKKAD K3. Aside from Kasiglhanan, the task force has also deployed additional military forces in Rizal province continuously launches Focused Military Operations and Retooled Community Support Program Operations (FMO-RCSPO) which is could also be equivalent to deception, harassment, intimidation, red tagging and killings.

The continuing fight for personal security and rights

Despite the NTF-ELCAC’s intensive militarization in Kasiglahan Village, and the entire province of Rizal, it still does not succeed in its ill-intention to demoralize the militant spirit of SIKKAD K3 members.

Even though the members of SIKKAD K3 are being treated as criminals under military custody inside their own community, they will never surrender. Ate Tata, along with other mothers whom we saw that day were living proofs that they democratic spaces cannot be withheld, and that the militant voices of the marginalized cannot be silenced nor buried.

Members of SIKKAD K3, may it be a few of them, were with us on that day to ensure that on the 73rd commemoration of IHRD, their demands for personal security, access to basic social services, genuine peace based on social justice will be heard. ###

Disclaimer: The opinions expressed in this article is that of the author only and do not necessarily represent the views of their organization nor of the CPDG.